SPOILER ALERT The thought is that some of the peptides (in both PRTC and my samples) degrade quickly, and this is what’s causing the loss of signal. I loaded my samples in batches of 25, so samples sat out up to ~2.5 days prior to being injected. I’ll need to consider “time out of freezer” as a factor when analyzing my results. This is obvious in the dilution curve data, where PRTC total area shows an obvious decrease over time. 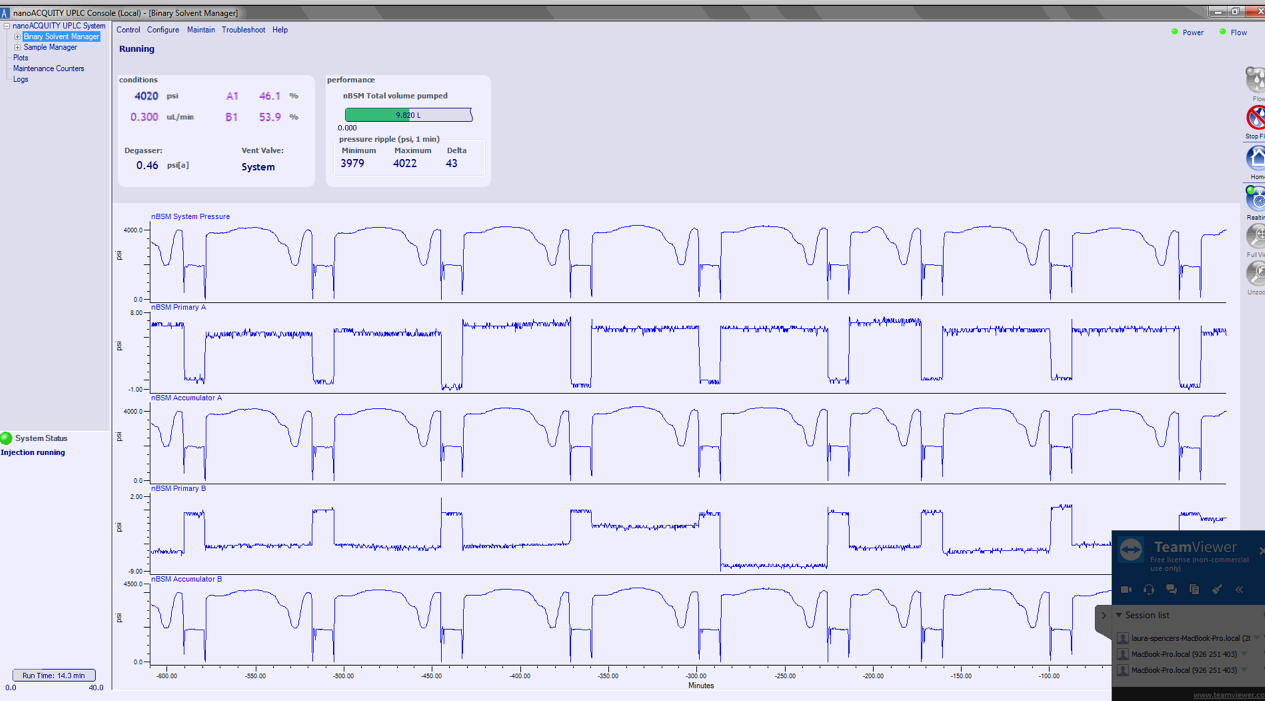 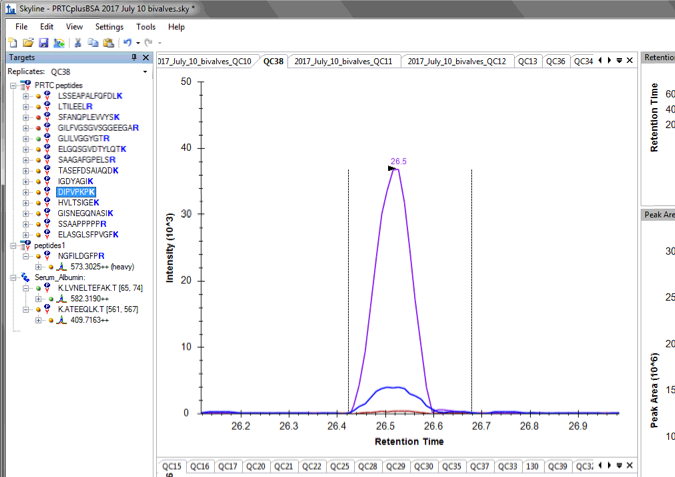 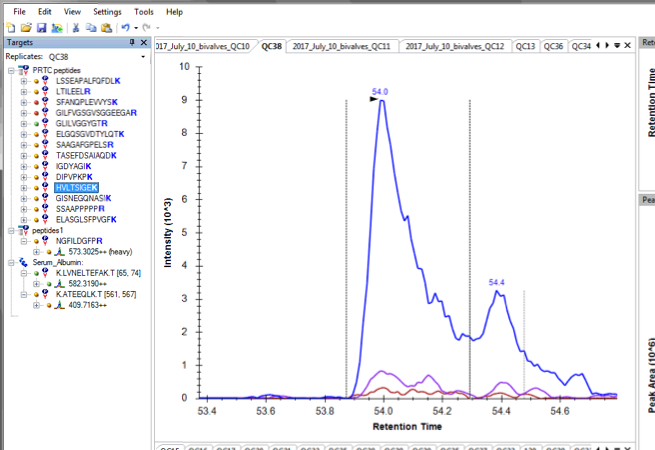 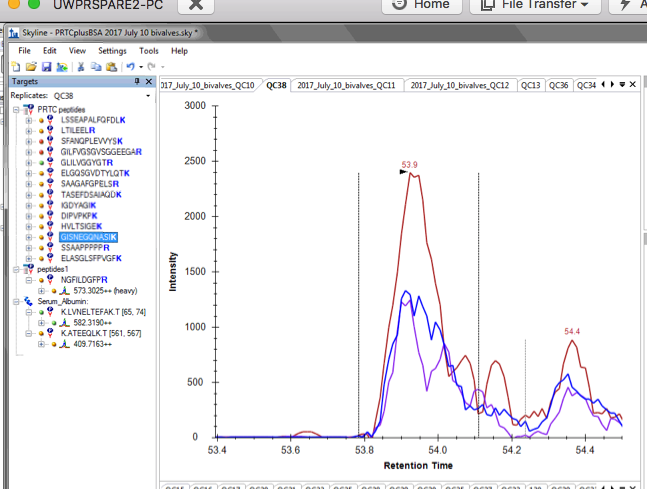 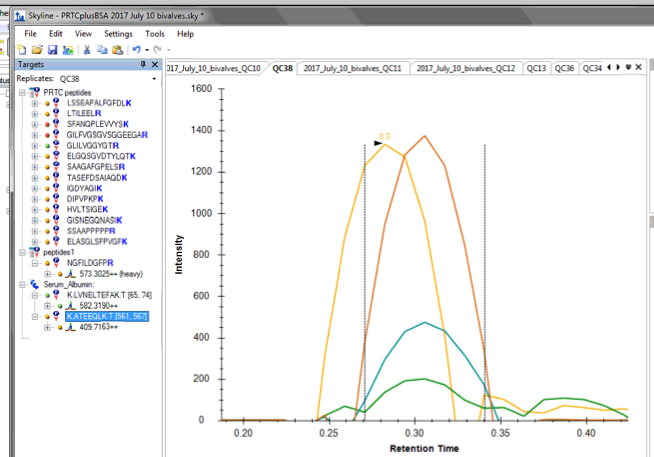 Consulted with Yaamini. She suggested checking out the PRTC data in my sample files. I loaded them into the QC Skyline file (PRTCplusBSA), and saw some oddities, particularly a handful of samples that had some completely undetected PRTC peptides. These samples are: 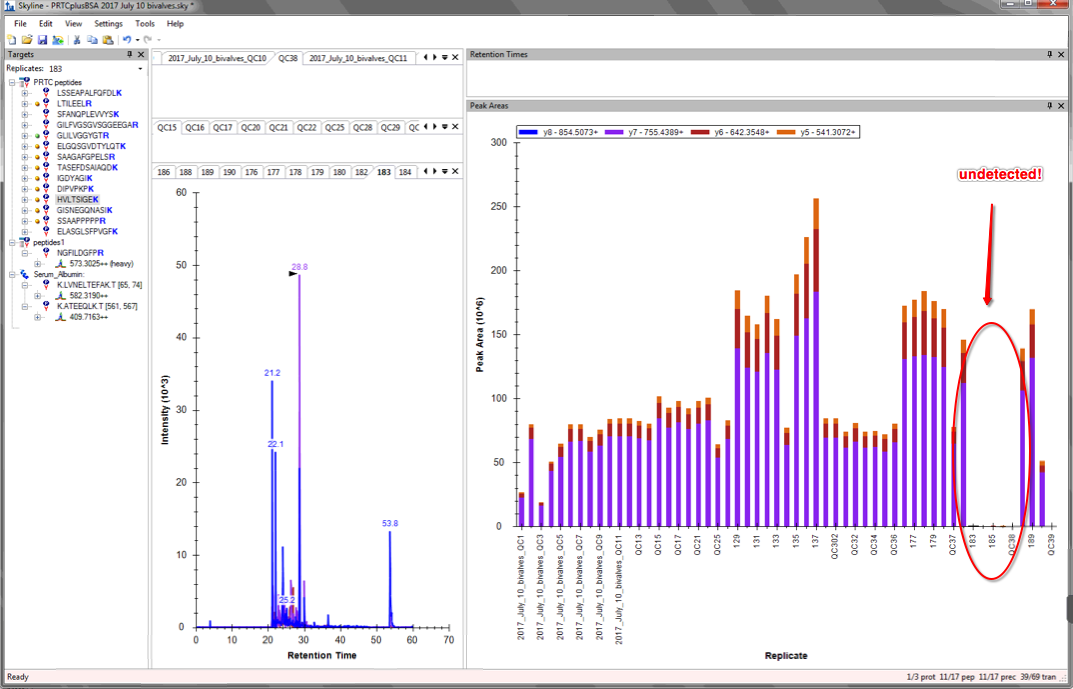 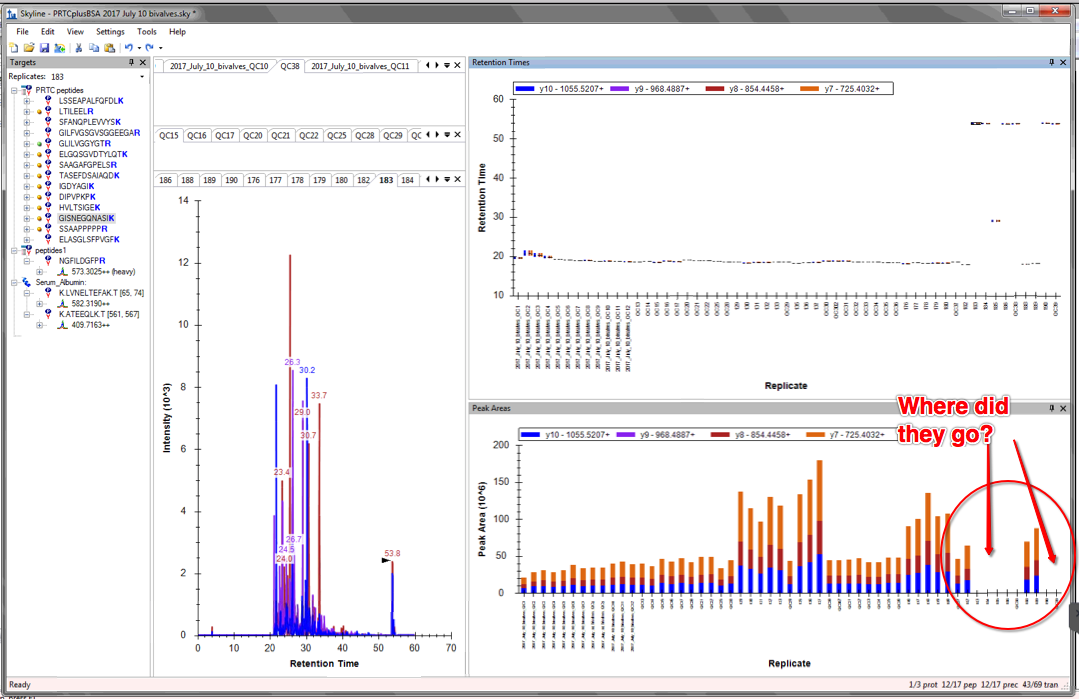 Consulted with Brook. These are her thoughts:

I decided to run 2 blanks, then 3 QC’s like she suggests.

Also, I asked Brook this:

I made a new QC vial by adding 30ul to the 10ul QC aliquot I got from Emma’s lab, vortexted, spun it down a second, then transferred it to an autosampler vial and placed it in the tray @ 1:A,4

A couple more samples ran before I was able to queue up the blanks. Oddly enough, they look fine. The latest QC does not, though: 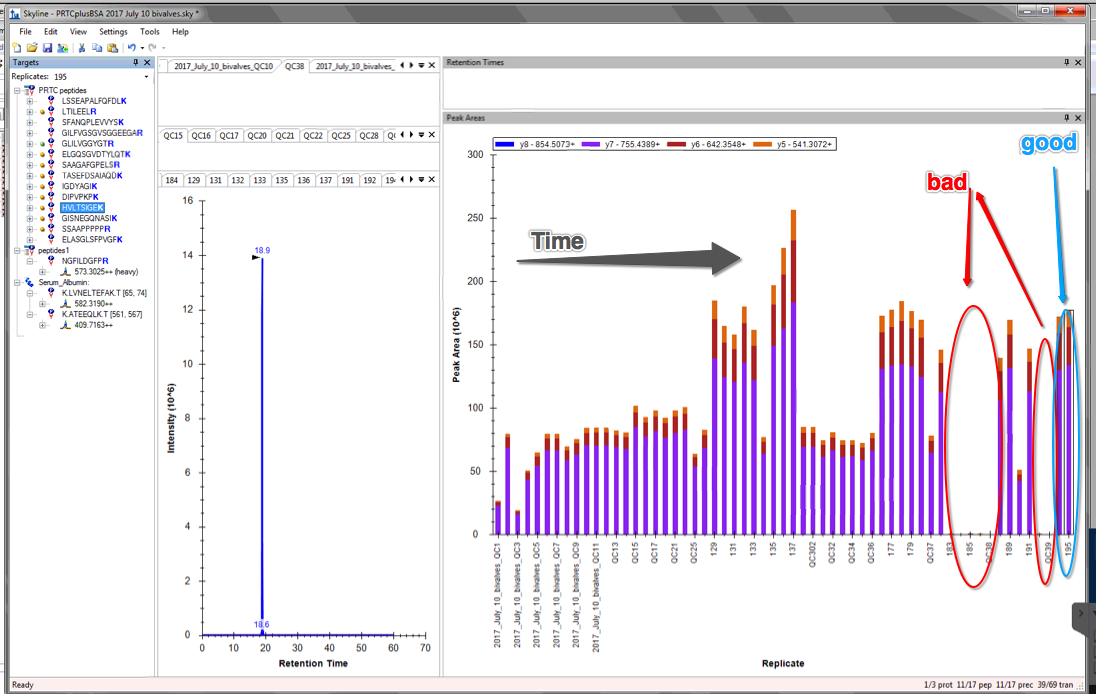 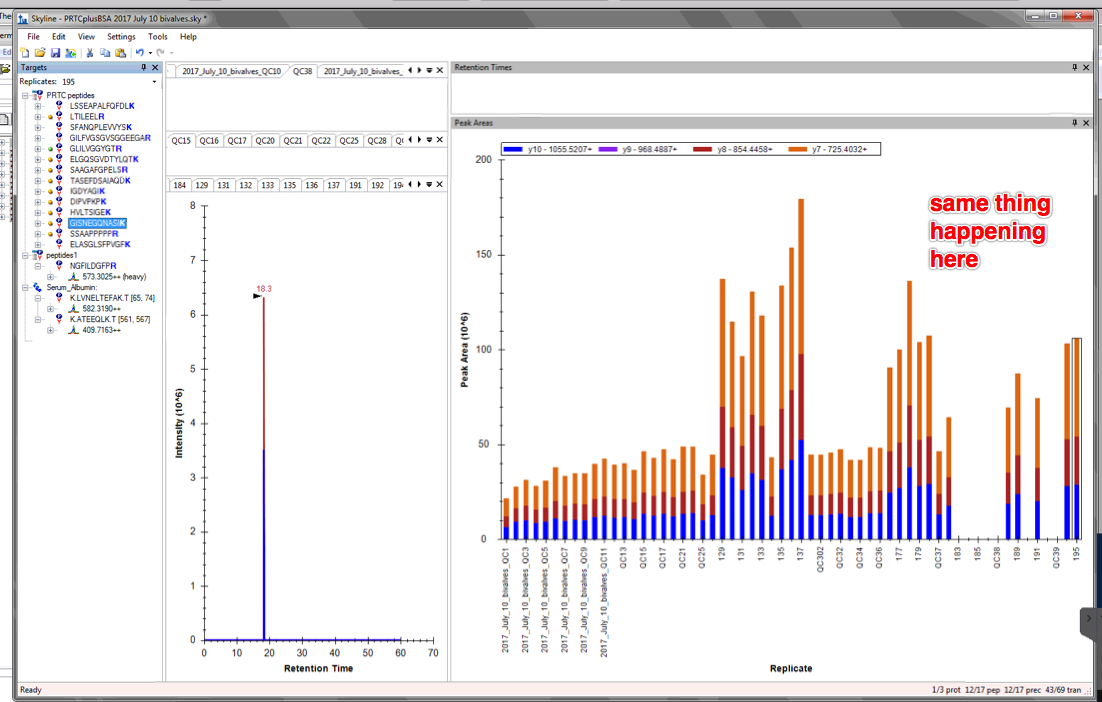 I’m going to run the 2 blanks, then 2 QC’s. Hopefully they look good. If not, I’ll have to run down to UWPR and put one of Yaamini’s samples in, run that, and see if that looks good or bad. If bad, then something is wrong with the column and Brook will meet me on Saturday morning to change it. If good, then something is wrong with some of my samples. Although, the samples that don’t look good are no different than the ones that look good that are adjacent- same PRTC, same preparation date & time, same time sitting out of the freezer, and a mix of Round 1 & Round 2 extractions, etc. So, I can think of no major difference between these samples that would cause such signal issues. 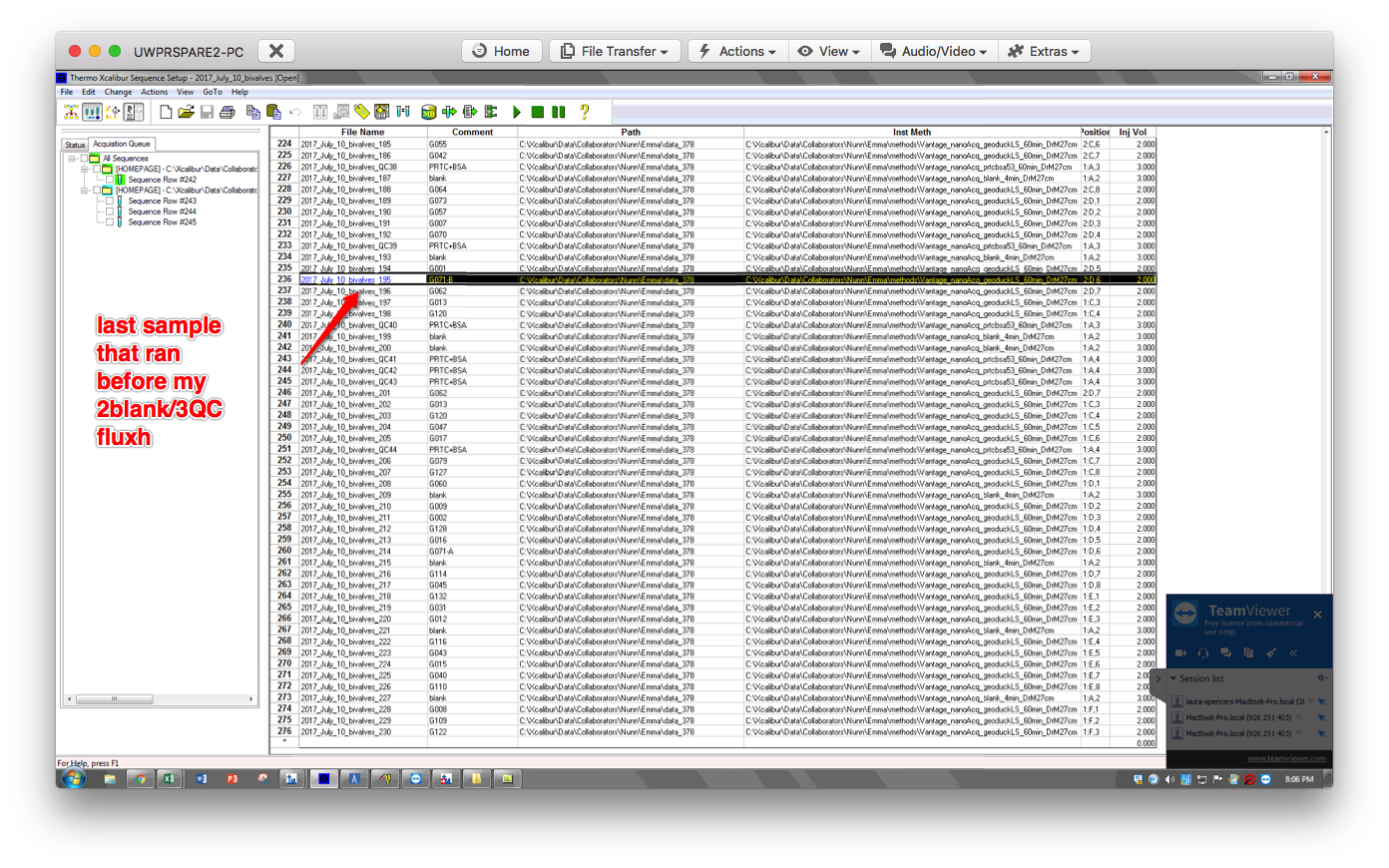 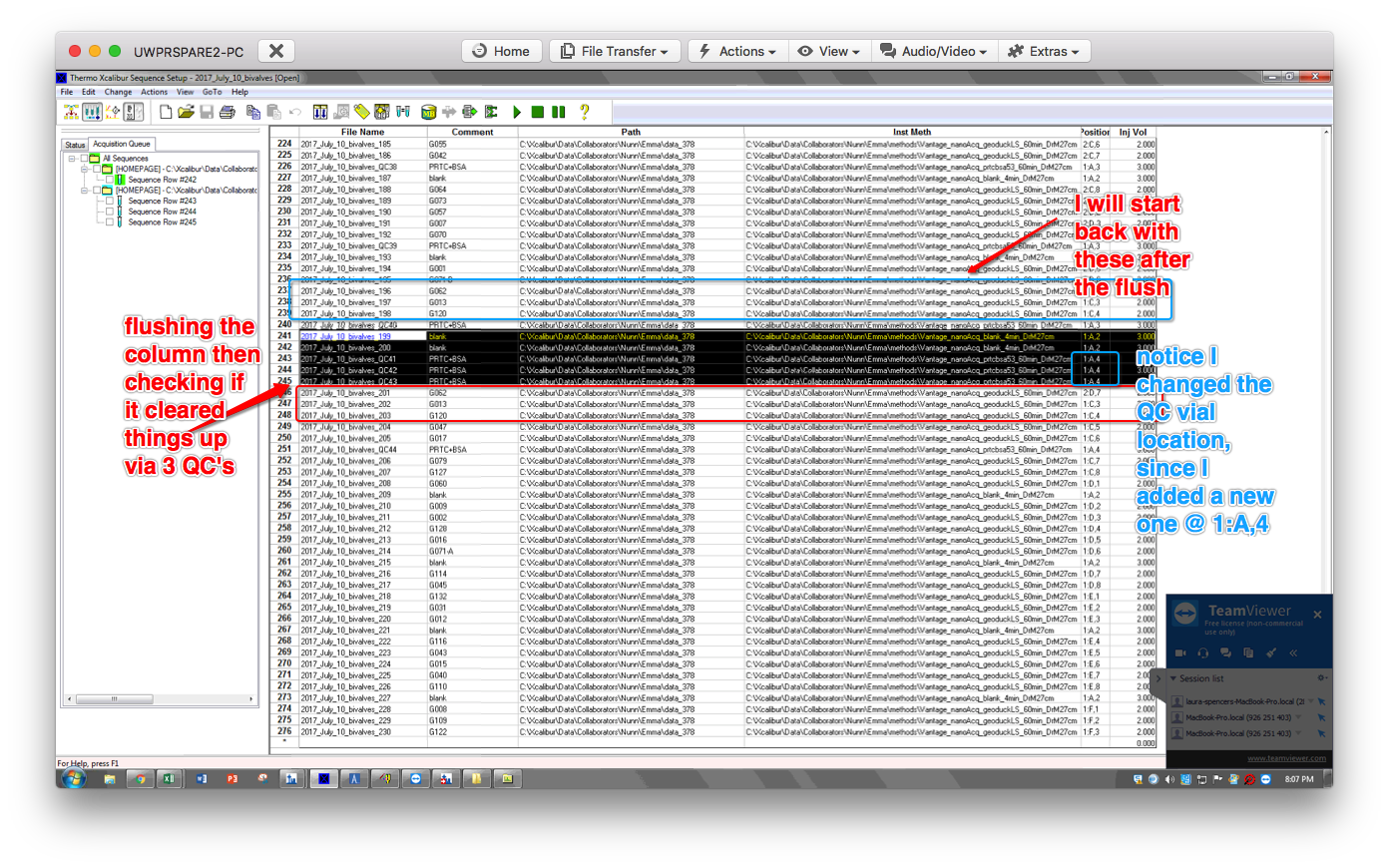 Here’s “bivalve_199”, which is the first blank in the flush 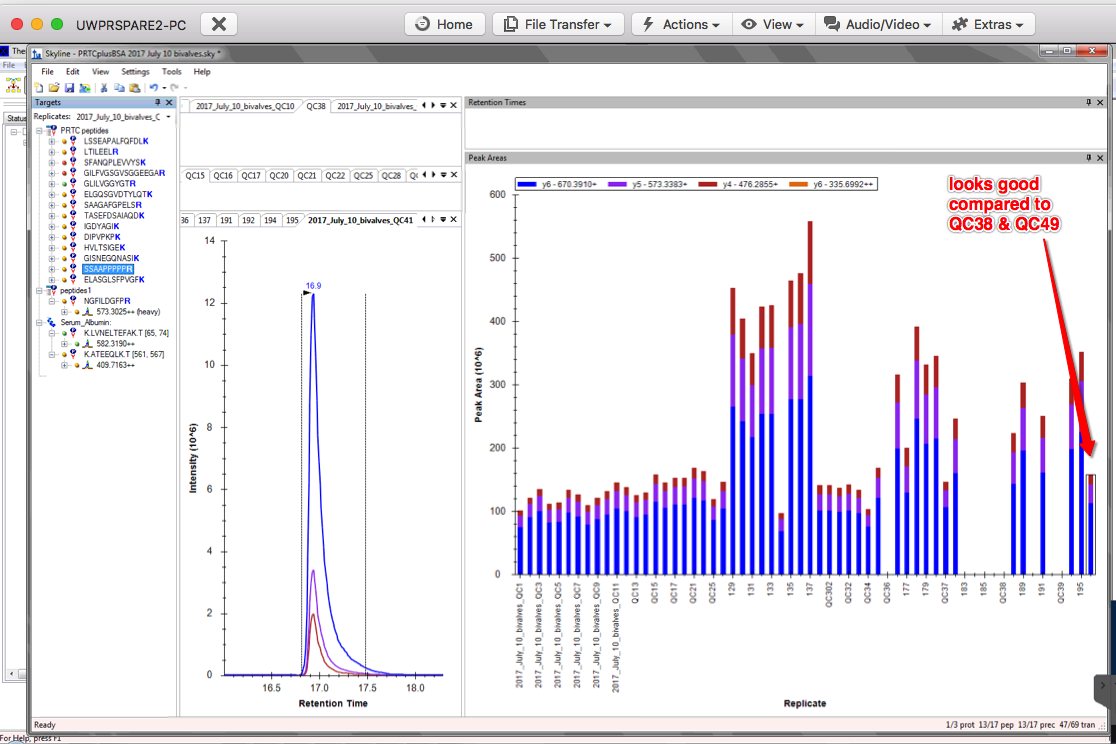 The blanks and QC’s looked good, so I re-ran a couple of my poor-quality samples. They did not look good. So, the thought is something is happening in those samples, like degrading peptides, or co-eluting peptides. I decided to move forward with my other samples, and keep track of those that do not look good. I can then either re-run them, or remake and re-run depending on time.