Taking a simpler approach to identifying correlations between environmental data and protein abundances. Goals of today was to:

The environmental data manipulation referenced in this post was executed in the Stats 2 R script.

In one of our team meetings we made the determination to ignore salinity data for the time being, since several probes malfunctioned. Up until this point I have performed all tasks/stats on salinity data alongside the other parameters, but ignored salinity when analyzing correlations. Today I generated correlation plots and found salinity may play a role. So, I decided to clean up salinity data as much as I could to include in my analysis. To do so, I reviewed raw salinity data via this plotly plot. Determined that the following salinity data needed to be removed due to probe malfunction: All CIE; FBB > 7/3 @ 09:50; WBB > 6/25 @ 05:30. I then removed all outliers from the updated salinity time-series data, and re-plotted. This is the resulting plot 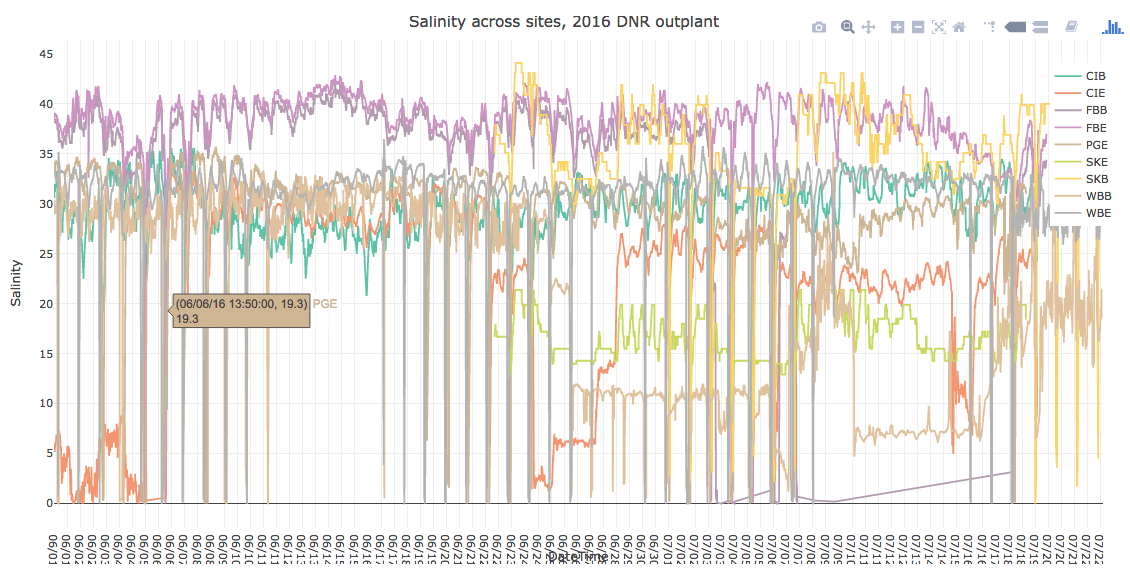 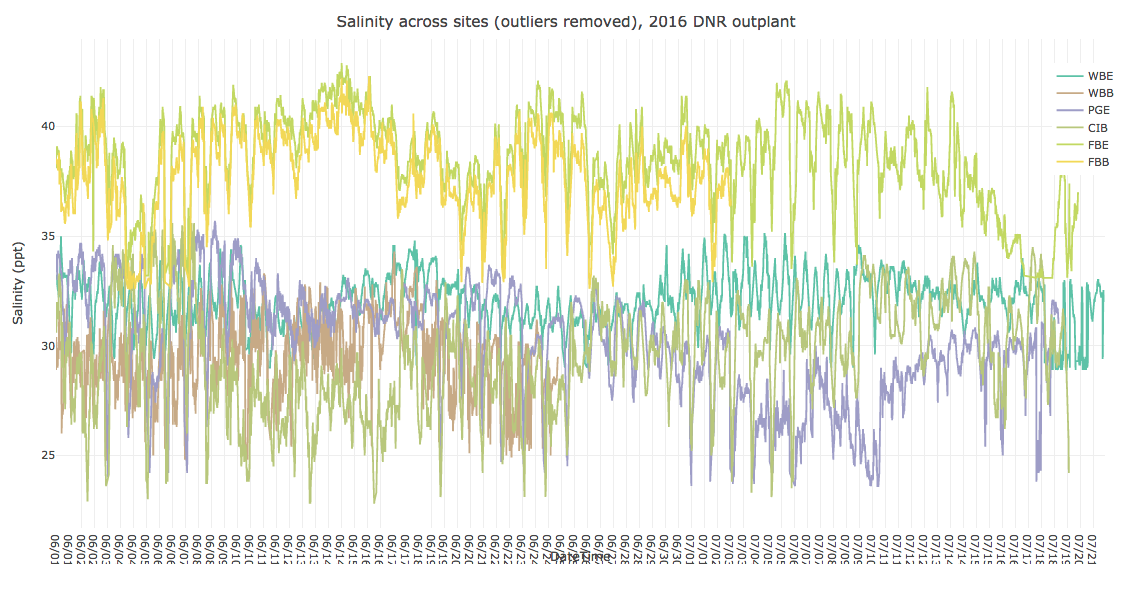 The rest of this post refers to actions taken in the Stats 4 R script.

Discovered the excellent ggscatter function in the ggpubr library to generate correlation plots. I generated correlation plots for the 3 differentially abundant proteins (HSP90, Puromycin-sensitive aminopeptidase, Trifunctional Enzyme). At first I was going to just use Pep1 (the most abundant peptide from each protein) to generate these plots. Instead, I z-transformed all peptide abundance data so they were all on the same scale, and thus could regress all peptides from each protein against environmental paramters.
It’s a good idea to quickly summarize how I’ve manipulated peptide abundance data in this project:

3. From plots, selected env. summary stats to use in models

Selected the following environmental parameters per the respective proteins for model constructions, using an approximate alpha=0.01 as cutoff: % Growth, DO.sd, DO.var, pH.sd.1, salinity.mean, salinity.sd.1. Here are the correlation plots for these parameters, using HSP90 for the purposes of this example: 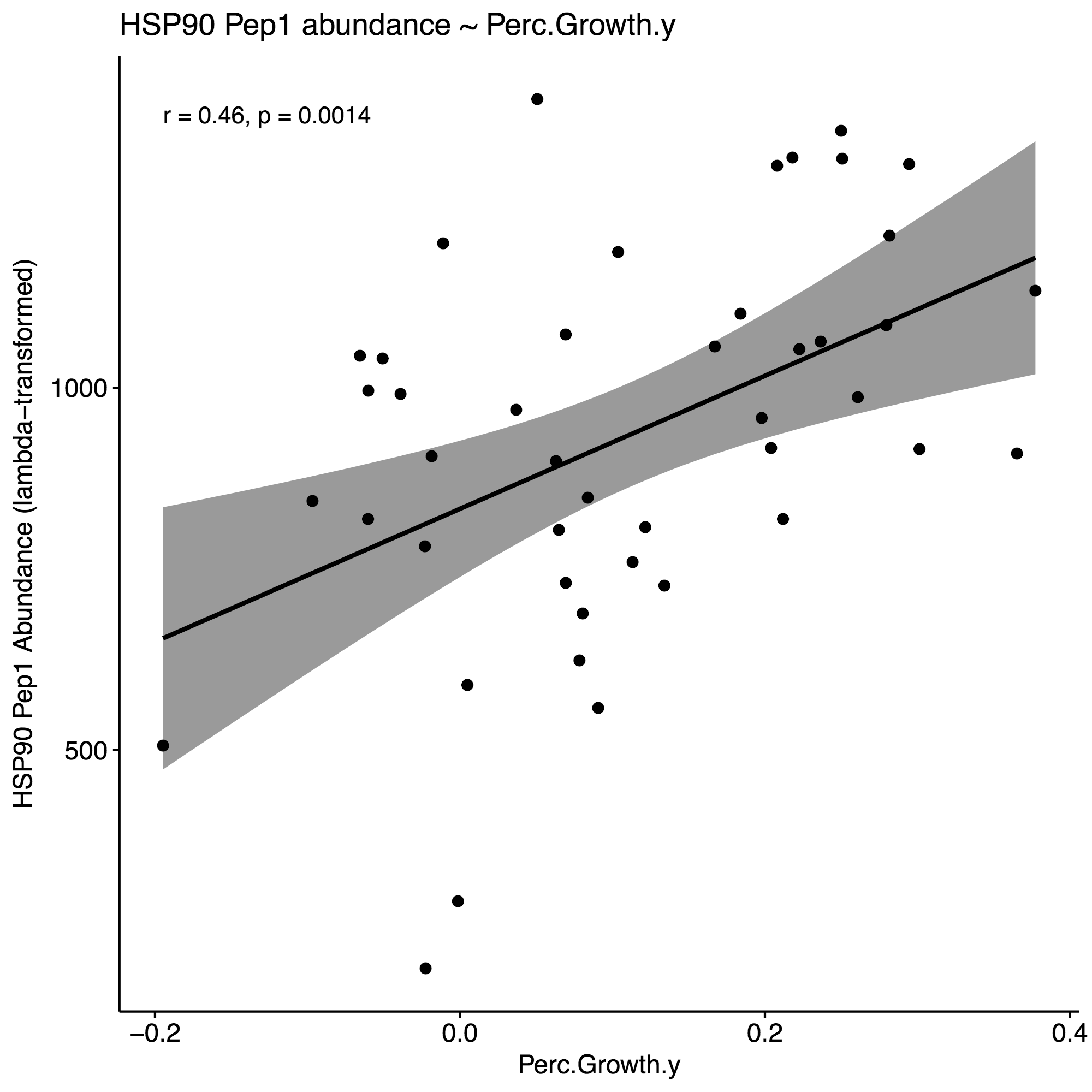 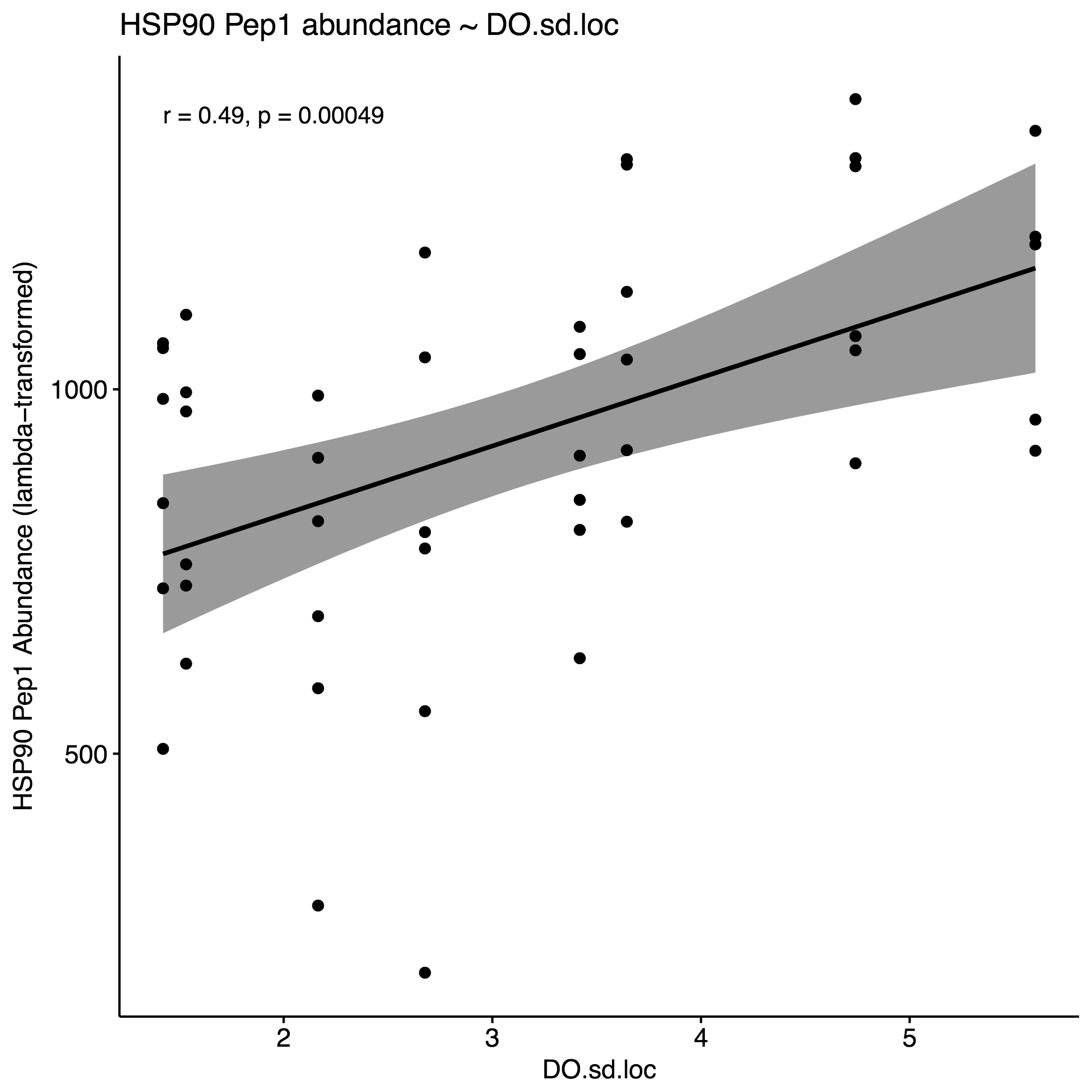 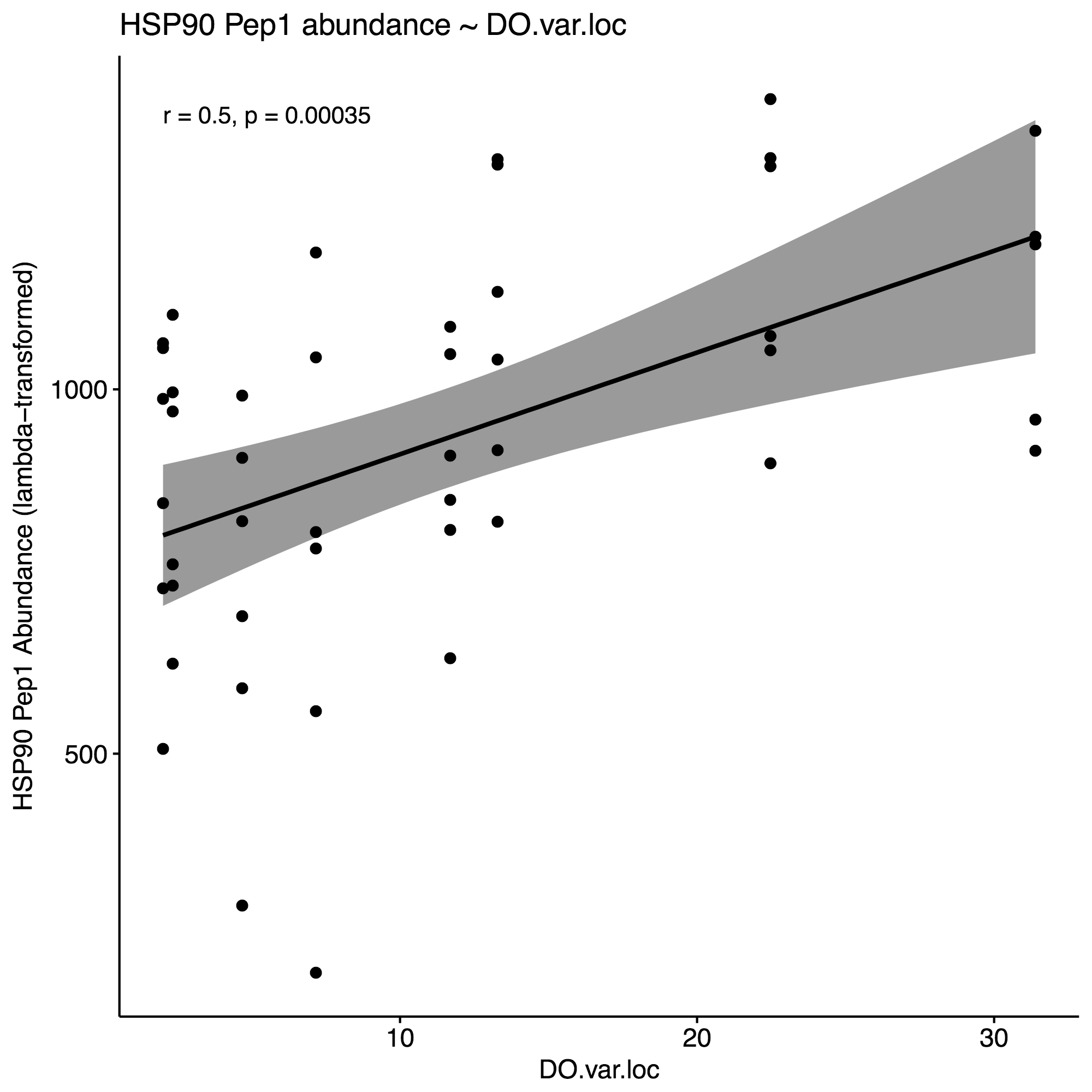 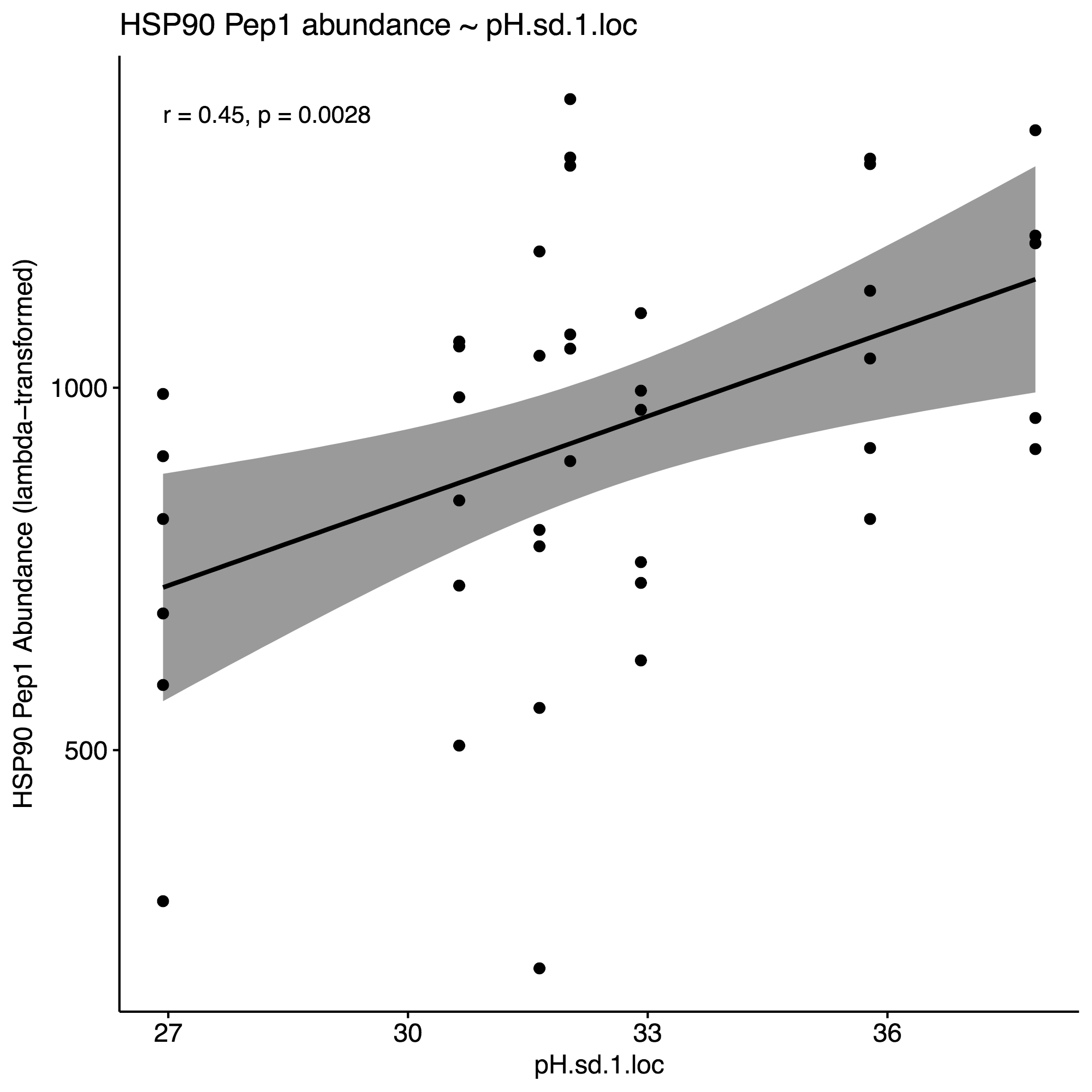 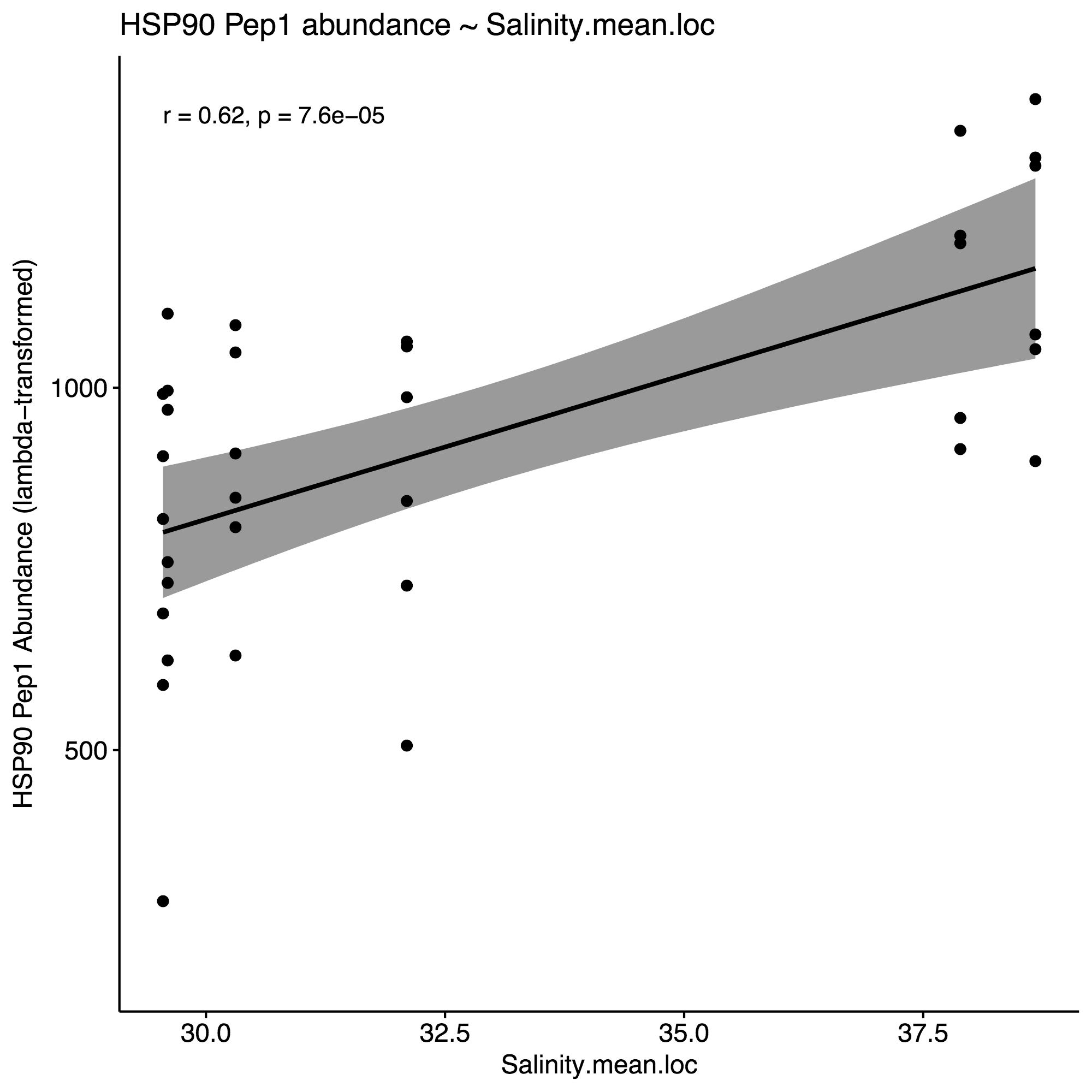 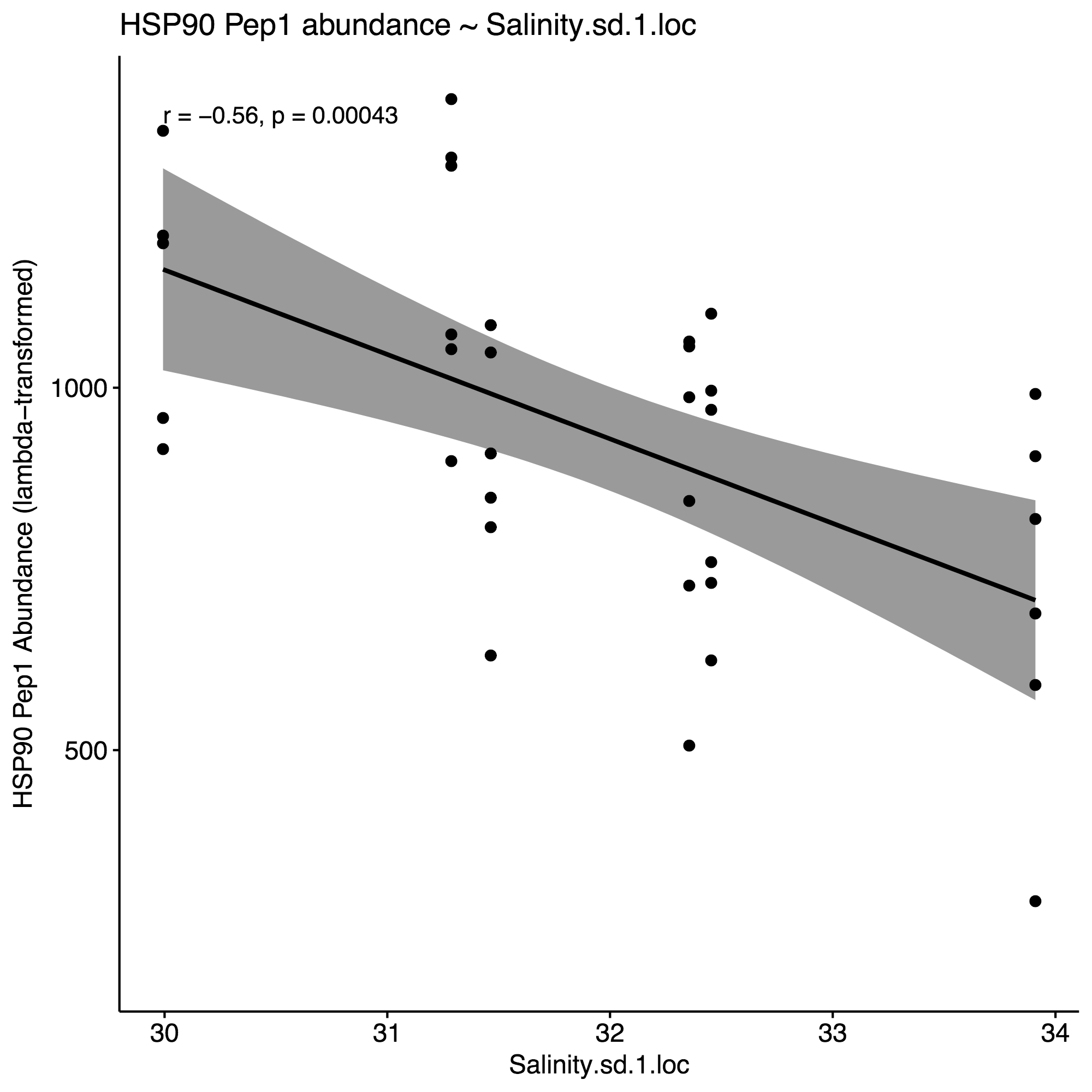 Generated a correlation plot with the pairs() function to identify any environmental parameters that are highly correlated; if identified, I can leave one of the two correlated metrics out of my linear model. From the correlation plot, it appears that: 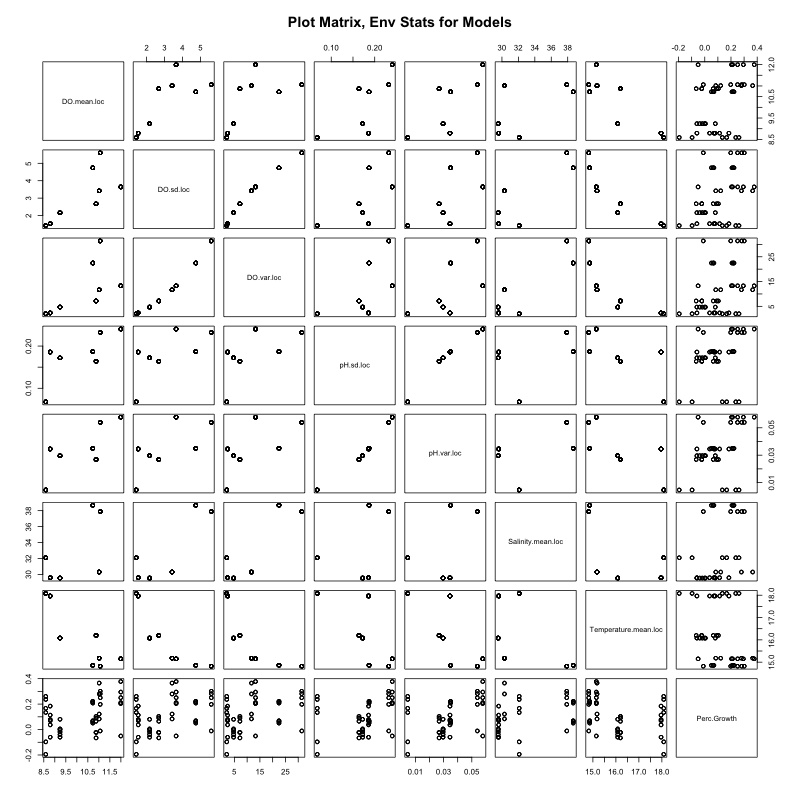 Also ran anova() on the model:

The coefficient significances are not adequate, and one parameter (T) was left out due to singularity. After messing with models for weeks I have decided to not include them in my paper. I’ve made this decision for several reasons: 1) I don’t believe that I have all influential parameters at hand to construct a representative model, 2) With the exiting environmental data, I believe that correlation analysis is adequate for the purposes of our paper, and perhaps most importantly 3) I don’t know what I’m doing so unable to make informed decisions nor interpret results (I hope to take the regression course next quarter). I also attempted to build a Structural Equation Model, but again, failed.